Using the backfix method for rehabilitation and postural correction

Abstract: In this paper we aim to investigate the effectiveness of the rehabilitation and postural correction method called Backfix on a group of 20 office workers in a high-tech company, who perform their work in sitting positions over 8 hours per day. The Backfix method, which is currently the European trademark registered by MediSport SRL, has two components: the evaluation part, which measures the muscle imbalances - agonist-antagonist chains (with two coefficients) and the level of mechanical work where the balance can be achieved; and the correction part, which uses highly effective learning software to control the muscular rebalancing trajectory. All subjects have been evaluated in terms of the groups of muscles involved in maintaining the posture of the trunk, and subsequently subjected to a correction program with the following objectives: restoring the right co-operation of antagonists - agonists across the entire range of motion; making the transition from the motion programs of the articulation to the motion of the joint; improving proportional coefficient values that describe the steady state muscles of the spine; increasing the level of force and amplitude, that is, mechanical work, in which the balance of the muscles that stabilize the spine can be maintained. The results were evaluated by comparing the set of biomechanical parameters characteristic of the method (motion amplitude, mean force, maximum force, and mechanical work). The level of achievement of the motor reinforcement parameters was appreciated by a computerized scoring system. After 10 sessions of physical exercise, the subjects have been re-assessed. The result analysis indicates a positively significant evolution of the whole group for all parameters demonstrating the ability of the method to efficiently cover a very wide range of variables as age, gender, personal history, etc., which are normal in a functional group of people with office work.

The framework for performance of lucrative activities specific to the contemporary world involves maintaining the body in a seated position for a long time. This position has a very unbalanced effect on the trunk support muscles. [1] [2] Muscular imbalances induced in this way lead to vicious postures that last for a long time and affect the constituent elements of the spine. [3]It is believed that pains appear after 10-15 years of maintaining vicious positions, as a consequence of generally irreversible changes of posture. This is why, from this point of view, pain is a late alarm signal.

Assessing muscular imbalances for the trunk support muscles may be an early sign of the risks associated with spine damage, allowing for the avoidance of irreversible manifestations. If these have occurred, however, it can be the starting point for restoring the functioning of the spine by muscular compensation of the damage caused by the vicious posture, via postural re-education process. [2]

With the Backfix method, which is currently the European trademark registered by MediSport SRL [9], the postural re-education process gets a consistent support. The method allows safe and efficient progress of the most difficult phase of the process - muscle rebalancing, and includes two components:

For each subject we measured the mechanical work values [in Joules] corresponding to the three exercises that define the method, starting from the Force - Amplitude curves associated with the exercises:

Subjects are submitted to a program correction with the following objectives:

a) Restoring the right co-operation of antagonists - agonists across the entire range of motion.

b) Making the transition from the motor programs of antalgic blocking of the joint, to the motion ones.

c) Increasing the level of force and amplitude, namely mechanical work, in which the balance can be maintained between the muscle chains that stabilize the spine.

d) Improving the proportional coefficient values that describe the balance state of the muscles supporting the spine.

In order to achieve the proposed objectives, after performing the tests, for each subject, the deficient muscle chains as well as the parameters of the computerized kinetic model that defines the kinematics and the dynamics of the exercise are established. The model type to be defined is rectangular, in the frame of the force-amplitude of motion. Model tracking is done through feedback that visualizes the relationship between model and practice. [10][11] The parameters of the model are customized according to the individual values measured in the initial testing. It was conceived in such way that if the subject reproduces the model with a precision of software between 7.5 and 8, the objectives of the program are automatically achieved. [12][13] We can consider that we are using this kind of feedback as an e-training method, which allows the subject to achieve the goal based on simple instructions. It is enough for the subject to understand what route he / she should follow on the line controlled by his / her movement for the score to increase. The subject does not have to understand the physiological and experimental bases of motion control that underpin the development of the model [12][13] He simply follows the pattern during the execution of the movement and gets a visual quality result by overlaying the model‘s graph with the graph of the motion achieved by him and a numerical quantitative result by the score penalizing the execution errors, thus reducing the perfect achievement that would correspond to the score of 10.

This paper aims to investigate the effectiveness of the Backfix postural correction and recovery system in the framework of muscle imbalances generated by professional activities. The working hypothesis was that an optimization is expected, following the application of the exercise program specific to this method, in the muscular imbalances identified in the muscle chains that ensure proper posture.

The experiment included a group of 20 people from a high-tech company, people who sit on a chair over 8 hours a day to perform their office work.

All subjects were evaluated based on the chains of muscle groups involved in maintaining the trunk posture, in accordance with an original methodology [10] and using an Ergocontrol type system of computerized kinetic therapy. [10][11][12][13] Based on the results of these tests, the CETOLO thoraco-lumbar balance coefficients and the CETAP anteroposterior thoracic balance coefficients were calculated. In order to assess the evolution of the group we used status diagrams and group statistics. The status diagrams are polar diagrams in which each point is characterized by the value of the imbalance of the muscle chains (represented by ratio / angle) and the value of the maximum mechanical work [J] at which the targeted muscle chains can still support the straining effort in balanced state (represented by the value of the vector radius). [12]

Following the initial testing and discussion of results, 20 employees opted for enrolment in the Recovery Program. The initial situation of subject evaluation for Backfix specific tests is characterized by the values (in Joules) of Table 1.1 and Diagrams 1.1 and 1.2.

Table 1.1 shows that initial imbalances in the CETOLO lumbar region (0,36) are greater than those in the CETAP cervical area (0,54). The recovery program was devised over 10 sessions, with a frequency of 3 sessions per week. After 10 sessions the subjects were re-evaluated. The results are shown in Table 1.2. and diagrams 1.3 and 1.4.

During the 10 sessions, the parameters of the computerized kinetic model that defined the exercise kinematics and dynamics were adjusted each time when the subject scored between 7.5 and 8. The effects of applying the exercise program were evaluated by comparing the set of initial and final biomechanical parameters, which are characteristics of the method.

The results presented in Tables 1.2. and 1.3 show a significant increase in the average of the group, both for the coefficients CETAP, from 0,54 to 0,64 and CETOLO, from 0,36 to 0,59, therefore, it‘s an improvement of the proportionality reports. This improvement is associated with positive changes in posture.[7]

**CID=Confidence Interval of the Difference

The analysis of the coefficients indicates a significant positive evolution of the whole group to all parameters, demonstrating the ability of the method to efficiently cover a very wide range of initial conditions such as age, gender, personal history, etc. that is normally encountered in a functional group of people with office work, involving many hours of sitting.

Increases in mechanical work values on TRBRS and TRGNIL highlight the increased possibilities of maintaining the balance at increased mechanical work. Being deficient groups, they were worked mostly. TRBRF, being the group with the greatest potential for mechanical work at the initial test, was not worked, the program aiming first rebalancing – raising the level of week muscle groups to the strength ones. We see the increase on the group mean for this parameter - TRBRF, from 47,5 to 92,3, as a confirmation that the exercises eliminated the blockages that prevented this group from expressing its real potential.

The results presented in the polar diagrams (Figures 1.1, 1.2, 1.3, 1.4) show synthetically and intuitively the progress in terms of the respective coefficients, namely the significant proximity of the entire group in relation with the target area (marked with green) for both CETAP and for CETOLO. 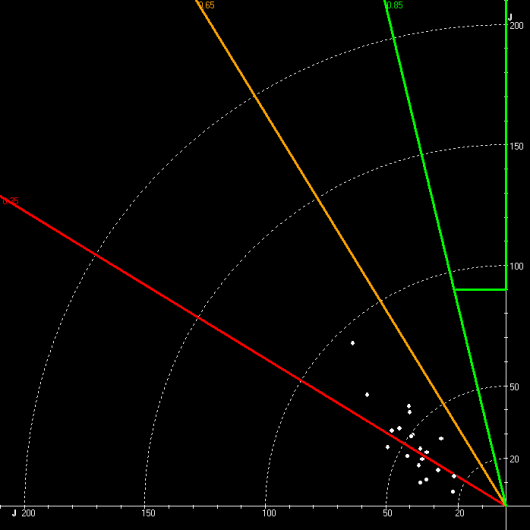 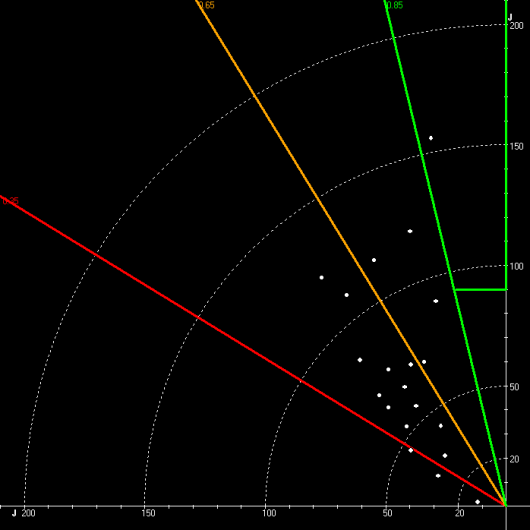 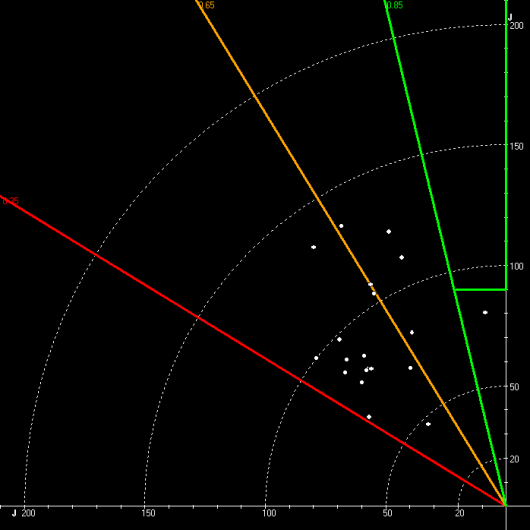 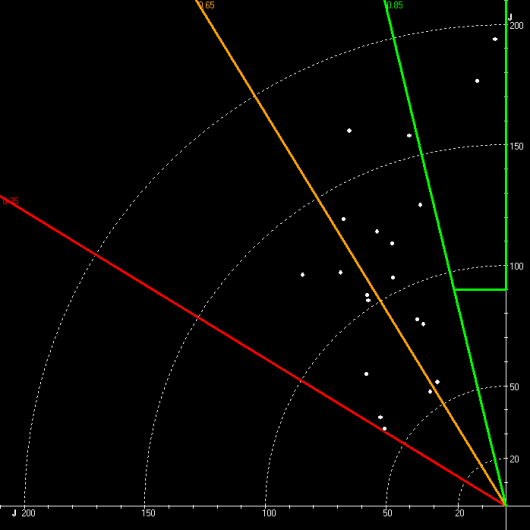 In functional terms, all these results means for the company‘s staff great effects on rotation movement, as turning the head back during the driving, to look back, or bending movement, in front.

The results show that the Backfix method represents a consistent approach for the postural re-education process. Lumbar rebalancing (expressed by CETOLO coefficient values) is higher than in the cervical area (expressed by CETAP coefficient), which confirms that the Backfix method respects the rebalancing principle according to which the balance of the cervical area is built on the lumbar balance. Significant increases in group-wide values in only 10 sessions are due to the accelerated muscle recovery and motor re-initiation of agonist-antagonist coordination, stimulated by the type of feedback used.

All these progresses have meant easier self-service movements. The high-tech company encouraged the beneficiaries to continue the program until bringing the group into the target area. Another immeasurable collateral effect was to increase the intensity of physical exercise prevention, the employees stimulated each other to go together to the gym. The company‘s management adopted on our proposal the idea of purchasing adjustable office furniture in order to improve the ergonomics of the office chair position with computer.