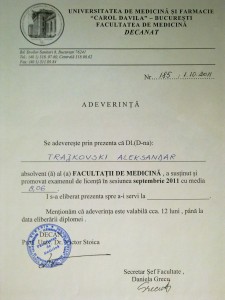 Dr. Trajkovski was born in a high educated family and he continues the family tradition as a third generation university educated, that is rarely to meet nowadays. His mother Snezana is a Technological engineer and his father, Miroslav Trajkovski - a doctor of medicine. He is also an ex tennis player. Noticing the draw to the sport and the talent of their child , his parents direct his way to the tennis. Following the steps of his father, dr.Trajkovski starts training in Bitola tennis club(now Zlatko Pavlovski Academy), on the age of five.
Having in mind his enthusiasm to the highest provocations, he starts off an ascent in his success first in the sport area and along with that continuous with realizing the dream of his life-becoming a high qualified doctor of medicine.


Aside from his tennis achievements, he is also awarded as a best student in his generation for the school year 1999/2000 in his school "Goce Delcev", confirming his ability as an excellent tennis player and an excellent student.
Having many obligations in his studies at the high school "Josip Broz Tito" in Bitola, Trajkovski has to continue playing recreational tennis until today as a doctor of medical sciences.
Actually his main objective and the highest motivation of his life is to proudly follow the family tradition of becoming a high educated on third generation. This tradition begins his not only favorite, but also grandfather -Trajkovski Aleksandar 1, who is a diplomatic jurist and a lawyer by education.
Trajkovski is also a member of the Romanian Medical Association, and Romanian Academy of (surgery).He completes his medical degree in the one of the highest prestigious university of Medicine in the world , U.M.F."Carol Devilla" - 1857, in Bucharest - Romania.He has been in private practice in local organizations ,at the prestigious hospitals in Skopje(Macedonia),Bucharest(Romania) and other countries. He also attends a lot of Medical Congresses that take place in various cities around the country. So he meets great and honoured colleagues of his from all over the world with that he commutes a mixture of thoughts and experiences. But the most important is that he has had the best time working with many, many people, helping them reach their goals. Doctor Trajkovski loves working with patients - talking with them, nagging at them, dealing with their needs and wants. He really always tries to do his best, and is never just satisfied with a job done, it must be a job well done. He always goes for the extra credit. Now he is writing and publishing in medicine and His dream is coming true, top clinic, wonderful team and thousands of operations...
"Success is the prize for those who stand true to their ideas!"
See More